The InterWave Studios team has been working hard on a first patch that should fix about all problems reported from players trying their Stargate: The Last Stand modification for the Source engine. Version 1.1 is available as patch and as full download on their website and if you are interested, the full changelog is below 🙂 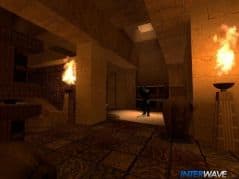 Stargate: The Last Stand just got updated to version 1.1

Weapons
——-
* Fixed P90 sometimes looking like it double fires
* Fixed Suicide bomb exploit
* Fixed staff world model blocking other staff shots
* Lessened the amount of energy used by each staff shot slightly
* Fixed G36 zoom bug after reloading
* Fixed suicide bomb showing 3 ammo
* Fixed inaccurate weapon description for P90
* Can now throw multiple C4 explosives before detonating
* Can now switch away from c4 after throwing all C4, and then back to the detonator later
* Fixed some C4 viewmodel animations
* Melee weapons now show ‘slash’ decal on the hit surface
* Fixed knife not making swing sound unless you are going to hit something
* Melee weapons now interact with physics objects
* Fixed AWP being much lighter than it should be
* Zat now stuns on first shot
* Zat rate of fire has been increased slightly
* Rate of fire increased on hand device
* Fixed delay when throwing a tac while being a kull warrior
* Hand grenades do slightly more damage
* Tac falloff (damage transferred to another player) damage has been reduced
* AWP does more damage, and has more recoil
* Hand grenades now explode faster
* Beretta M9 does less damage, improved recoil
* Added Kull Disruptor weapon attachment for the P90 that the Tauri scout can carry
– Degrades armor of the Kull (shows as P90D)
* Only Goa’uld classes and Tauri scout can carry a Zat
* Projectiles now get offset by view angles (recoil)