When the original Peggle graced Steam, many gamers spent many nights and indeed many early hours of the morning fixated. Will Peggle Nights be keeping us up all day?

If you were hoping for Peggle taken to the next level, prepare to be very disappointed. Put it this way – if you want to play Peggle Nights but would rather not fork out the $10, there’s actually a free version. Simply turn down the contrast on your monitor and then load up the original Peggle. 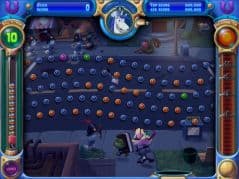 If you were hoping for a Peggle revamp, prepare to be disappointed

We honestly wish we were joking. The concept of the game has not changed in the slightest – you fire marbles around the screen in an attempt to hit and destroy all the pegs scattered about. Then you move onto the next level and repeat. Purple pegs still give huge scores, green pegs still give super powers and blue pegs still constantly get in the goddamn way. Except now… it’s nighttime.

All the same blips and blops are there, the same ‘Extreme Fever’ fanfare returns with a vengence, all the same music. Except now… yeah ok, you get the picture.

So the big question is what new additions are there that will urge you to go and pay money for a game you already own. To put it bluntly, added extras are few and far between. Each of the new 60 levels (most of which are so similar to the original levels you won’t be able to tell the difference) now has an ‘Ace Score’ that is basically a high score that you can aim to beat if you can really be bothered. There is also one extra ‘Peggle Master’ with his own new super power, which to be honest is really not worth mentioning. 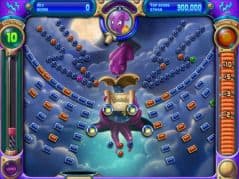 There’s a new Peggle advisor, but other than that, this is basically the same game

Each of the levels now also have inane names, like ‘Horsepower!’ and ‘Call for Help!’, as if the game really needed to be made any sillier already. But the real additions come in the form of statistics and trophies that record all your big Peggle achievements so you can feel all good inside about your awesome Peggle skills. The other big addition is the ability to download supplementary Peggle levels completely free of charge. Hurrah!

Maybe we’re being a little harsh – the original Peggle was so simple yet so addictive and technically it could be argued that if a formula works, why change it? Yet it is still impossible not to feel disappointed when you realise quite quickly that you are essentially playing the exact same game you played a year ago. Most Peggle enthusiasts will have been hoping for at least a little bit of innovation applied to their beloved puzzler.

Essentially, Peggle Nights is Peggle in its pyjamas, tucked in and ready for bed. If you played the original, don’t expect anything new. If you didn’t play the original, go and play it. What is ironic is that to many, the original Peggle was associated with staying up very late and playing into the early hours of the morning without realising it. Peggle might as well have been called Peggle Nights in the first place.