I-Fluid – what you might regard for a new ‘Apple’ product turns out to be a motley physic-based adventure just like the good old ‘Marble Madness’ or more recent ‘Spectraball’, made by the french indie-developers from ‘Exkee’. But I-Fluid is not just another clone of these games – it offers some fresh new ideas and tries to give this mouldy concept a new touch.

Can this new creation keep with the good old games or is it just another failed attempt to change a solid and efficient concept that cannot be renewed?

Experience life as a drop of water 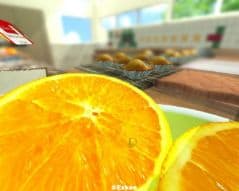 The game looks beautiful and feels great to play

As already mentioned I-Fluid is not just another game where you roll a ball from one point to another. You the player are a drop of water lost on its journey through a plumbing system and now you will have to explore 15 different levels to continue your journey. So much for the story.

I-Fluid features three different game modes that can be unlocked one after another for each level. In the mission mode your goal is to simply reach the finishing point of the level. It gets a bit more difficult in the Pental mode in which you have to find five pental flowers hidden on spots you would usually not come across in the linear mission mode. Last but not least I-Fluid delivers a time-attack mode in which you have to run against the clock to reach the finishing point. Nothing groundbreakingly new so far.

Fruit is the game’s lifesaver

The gameplay is where I-Fluid comes into its own and exceeds rather than being ‘just’ another Marble Madness clone. Since you play a drop of water you are exposed to different sources of danger and your natural need of regeneration. All levels play in environments from our everyday lives. For example you will have to find your way through a kitchen with food being cooked, cakes being baked and fruits all over the place. The problem is that the smallest of objects can become a deadly enemy. If you roll onto a sponge, prepare to get absorbed. Move past a hot steaming cake and you’ll end up evaporated.

Conversely, roll over fruits and your drop will regenerate and grow again. Whether you get absorbed, evaporated, pushed aside by a fly or die elsewhere, you will get spawned back to one of the fairly placed checkpoints you have reached before your death.

In every level there are multiple paths you can explore and lots of environmental events. At one point a bunch of paper-clips come flying towards you and due to the brilliant physics they end up always falling in different positions and directions so you end up in a different situation every time you play, where you have to decide whether you would better to move aside, plough your way through it or even find another way around this obstacle. Every time you play a level it is a new experience. 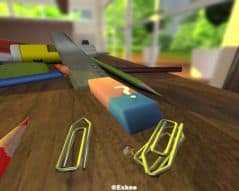 The obstacles are varied and each run through feels different

Thanks to the physics and the different game modes you will feel motivated to play each level over and over again. The exploration of the levels and the possible interactions with the different objects becomes an addictive and entertaining pastime. You’ll find yourself pondering ‘Will this small piece of paper absorb me or can I roll over it…? Dammit!’

The controls of I-Fluid are simple and just like most physic-based adventures the game can be controlled with a mouse and keyboard or with a gamepad. Both works well. The mouse is used for adjusting the camera and its keys are used for jumping, climbing and interacting with the various objects.

Even though the graphics cannot keep with the current ‘Big Games’ like Call of Duty 5 or GTA 4, I-Fluid still features some nice effects and a realistic look. The fruits and cakes look good enough to bite into and the environments have their own cartoony charm. Unfortunately graphical errors will appear from time to time but a restart usually solves these errors. Also noticeable is that the game wants your attention so much that it becomes uncooperative when you try to minimize it and in its pure jealousy I-Fluid punishes mininzing with a crash.

The sound effects and music are catchy and fit to the game but after a while you feel like it would be nice to have some more varied songs. Strangely enough the multimedia keys on our keyboard appear to be disabled while I-Fluid is running which, together with the minimizing bug, make for irritating problems.

By and large I-Fluid is a very good game and if you can see past its small bugs and errors, its a great alternative to the current ‘Big Boys.’