Real racing sims are few and far between at the moment, so there was much jubilation when a Swedish Development Company named Simbin released Race  The WTCC Game. Now they are back with their latest instalment Race 07  but does it keep the Racing Sims torch alight, or does it merely crash and burn? Steamfriends.com investigates.

In With the Old

It must first be noted that Race 07 isnt a completely brand new game; Its more of an update of the original  it fact it contains everything the original had to offer. All the 06 cars, tracks and modes are there but now they are joined by a whole host of 07 goodies and suddenly there is more choice than you could rev an engine at. Not only are there over 300 authentic cars at your disposal, ranging from the simple Mini to the face-melting speed of the F3000 Formula beasts, there is a total of 17 real-life circuits to race around, each pain-stakingly recreated to perfection (with maybe the odd different here and there to improve your gaming experience). With 32 different routes to take around these tracks, it will be a while before youve seen all the game has to offer. 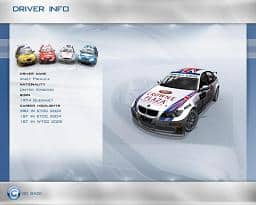 Of course Simbin enjoy frequently reminding us that this is THE official racing game and thus throw lots of official logos around the screen including BMW and Chevrolet while all action ingame is being filmed by none other than Eurosport.

Into the game, then. After finally choosing your car and track combo youll be find yourself sat in your garage, ready to burn. Or maybe not. For, unless you are a self-obsessed racing fanatic, this will not be a smooth ride. This isnt your average racer, where you can power it round all the corners, maybe giving the brake a bit of a nudge now and again  this is serious business. Just try speeding those corners and youll be seeing lots of lovely close-ups of tyre-stacks. Fortunately there are tons of driving assist options for the beginners, including antilock brakes, traction control and stability aids, which can then be disabled as you get a bit more pro.

Each branch of a tournament is divided into parts, beginning with one of two practice sessions, a qualifying round (with the best lap being awarded pride of place at the front of the starting grid for the main race), followed occasionally by a warmup round, and finally either a single or a pair of races, concluding, of course, with the final results. Oh and lots of handing out of wonderful awards.

The races themselves are not for those people who get bored quite easily. With some races lasting 15 laps and taking up to 40 minutes to complete, youre going to need a lot of stamina and willingness to see this game through to the end. Once you move from the novice controls to either semi-pro or pro, life becomes even more tricky and Race 07 demands that you maintain focus constantly throughout. Each action, each gear change, every minute detail must be precision, else that trophy is never going to be in your grubby hands (well, virtually anyway). 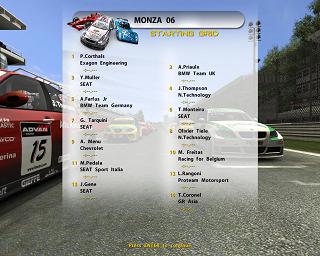 Switching to pro mode also presents many new problems. Try smashing into the side or driving in the gravel too much and youll find that your engine gives up, or you get a puncture or similar  thats the end of your race. Watching gear change is also a must as well  swapping down gears too quickly when the engine isnt ready will cause it to blow if done one too many times. Its all very technical and really adds to the realism Race 07 has to offer. However it will very quickly become all too obvious that this game was not made for optimal performance on a keyboard  its impossible to make minor alterations to your direction and we ended up having to resort to tapping left and right to line the car up. If you are willing to dish out the cash, go for a steering wheel and the experience will be greatly enhanced.

All the official rules and regulations are there to hinder your progress, of course. False-start the race or cut the track a couple of times and youll get a nice Stop n go penalty slapped in your face, for which you will need to take a timeout in the pits to do away with. Standard Yellow and Green Flag practice are also implemented  and dont even bother driving backwards round the track. Those officials wont take it lightly.