Back when the original Call of Duty was released, it was met with overwhelming acclaim by players and critics alike. The sequel also excelled, but unfortunately this streak of genius was knocked back by the sorely average Call of Duty 3. Do Infinity Ward have what it takes to put the series back on track, or has the Call of Duty series been KIA?

The storyline is your standard wartime extravaganza, involving the United Kingdom and the USA and their attempts to stop Russian ultranationalists from destroying the world via WMDs. Technically the story is pretty well-structured and doesnâ€™t get too political/ridiculous to follow – although there are certain parts in the game where we found ourself shaking our heads in disbeliefâ€¦ but Iâ€™ll mention those a little later on. 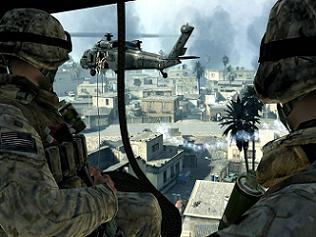 You take control of two soldiers in two different stories which come together for an explosive finale â€“ Sergeant John â€œSoapâ€ MacTavish of the British 22 SAS Regiment and Sergeant Paul Jackson of the United States Marine Corps 1st Force Recon. Both characters are under the command of their superior officers and at one point you actually get to play as Soapâ€™s commanding officer, Captain Price, in a flashback, something which has not been tried before in a COD game.

But enough about the story â€“ letâ€™s talk gameplay. As you would guess, Call of Duty 4 plays pretty much like itâ€™s predecessors (because if you have a good thing going, why not stick with it?). But now thereâ€™s an added twist â€“ for this is the first COD not to be set during World War II. This is definitely the right way for the series to go â€“ one of the reasons that the third installment didnâ€™t go down so well is that the whole WWII scenario just didnâ€™t feel original anymore, which is a problem with using the same formula over and over again. I mean, come on, if I had to count the number of war shooters based during WWII, Iâ€™d need more hands. A lot more.

The â€˜Modernâ€™ bit of the name is what makes this Call of Duty special, and places it miles apart from the others. Where the original Call of Duty was a breath of fresh air in a mainly abysmal range of â€˜war simsâ€™, COD4 has taken the genre into the 21st century with an almighty bang. The look and feel of the landscapes; The weapons you get your hands on, with laser sights and built-in grenade launchers; Never before has a war game involved darting through a Russian-ridden television company building, trying to find the room from which the ultranationalist enemy is broadcasting his messages of terror to his people. 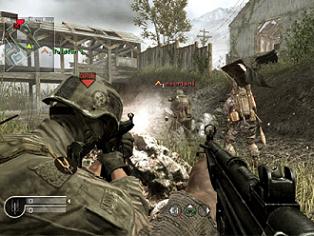 The action is insanely breath-taking and at times it feels like Infinity Ward have reinvented the whole genre all over again. From the word â€˜goâ€™ you are thrown straight into the hectic battlefield and the bullets wonâ€™t stop flying until youâ€™ve killed every last one of your foes. Itâ€™s fast-paced, itâ€™s adrenaline pumping, and itâ€™s what every first-person war shooter â€“ heck â€“ what every first-person shooter should feel like. Everytime you think youâ€™ve just seen the most dramatic scene the game has to offer, COD4 will throw yet another original encounter in your path â€“ be it an epic battle with some mean-looking helicopters, or a mushroom cloud engulfing your own team in smooth, horrifying slow motion.

Keeping It ‘On the Low’

Of course war isnâ€™t all bullets flying and people dying â€“ some missions require you lay low and keep quiet. One particular mission has you lie in long grass completely still while a troop of enemy soldiers passes right over you, missing your frozen body by inches. Itâ€™s extremely intense, and we even found ourselves holding our breath just in case they could hear usâ€¦ it really drags you in.
Other missions sit you in the gunnerâ€™s position in a low-flying helicopter, destroying the land below and generally helping out your troops who are fighting on foot. These missions help to space the bang-bang-move levels out and keep the whole game feeling fresh. And, of course, they are a lot of fun â€“ who wouldnâ€™t want to play God above a battlefield!

Unfortunately, it does all go a bit O.T.T. now and then. At one point, your team is racing towards an enemy encampment when two WMDs are launched high into the sky and Intel reports that in exactly 15 minutes time, the whole of the east coast of America will be rubble. What follows is a race against time to bust into the base, locate the missile control room and input the abort codes (which Intel conviently extract from the enemy with only minutes to go before impact). Then itâ€™s â€˜Congratulations, you just saved approximately 41million lives. Whoâ€™s next?â€™. Itâ€™s all a bit too much and just a little far-fetched. Not that this is a bad thing as such. It just feels a little out of place with the rest of the gameâ€™s realism.