In a recent interview with CVG.com, Robin Walker from Valve revealed plans to introduce matchmaking functionality into Counter Strike: Source, Team Fortress 2 & Left 4 Dead. Matchmaking is currently being implemented into Left 4 Dead which is most likely going to be the first game to receive matchmaking capabilities when it is released later this year.

Matchmaking is being offered as a game service for those developling under Steam Works, so expect to see the system introduced down the line to many of the Third Party games being developed with steam in mind.

There is not much information on what the exact features the matchmaking system will have at the moment, but Walker explained that the system will be designed to cater for those on a clan or team level.

Quote: “We’re working on matchmaking right now for Left 4 Dead,” claims Walker, “and the plan is to roll that back into Team Fortress 2 and all our other multiplayer products. We’ve no firm plans in terms of being able to say what exact feature-set you’ll get, but there’s absolutely some matchmaking systems going in. In terms of more generalized matchmaking, not so much on the individual level, but on team and clan levels, that’s something we’d really like to get into Steam at a basic level, so that it supports any product.”

The Steam Works site also revamped before the weekend, and states that the matchmaking functions will make it into Counter Strike:Source & Team Fortress 2 alongside Left 4 Dead.

Quote: The same robust back-end that brings players together for Counter-Strike: Source, Team-Fortress 2, and (coming soon) Left 4 Dead. You can customize these features to create specific matchmaking and lobby functions.

Below is a picture of the Game Lobby section in Left 4 Dead. 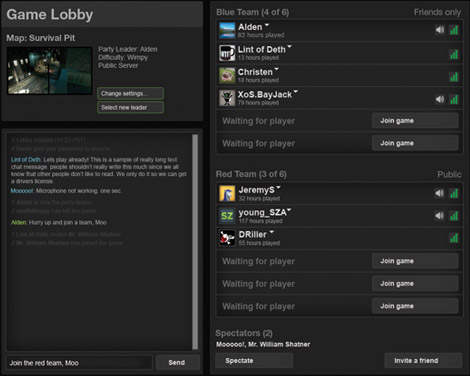