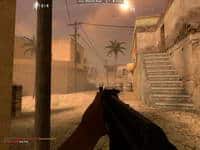 Today, July 9, 2007, it has been nearly a week since the Insurgency mod has been released. Insurgency is a free mod built on Valve’s award winning Source engine and has been in development for over 3 years. Over the past 3 years it has been one of the most anticipated mods and has one of the biggest fan bases. Insurgency immerses the player in an intense online combat experience. Set on the modern battlefields, Insurgency simulates infantry combat that encourages the use of teamwork and tactics to close with and destroy the enemy. So what do we think since it has been released? And what can we expect for the future of this mod? We sat down to experience it for ourselves and had a small interview with one of the main developers James “Pongles” Mansfield.

Saturday June 30, rumours flock the sky about Insurgency actually being released the next day. At first we can not believe this as we have been waiting for so long. But soon enough the INS (Insurgency) IRC channel on GameSurge is buzzing with hundreds of people. The website becomes nearly impossible to reach due to all these people who can not wait to get the first glimpse of the download. Unluckily it does take another two days before it gets to the final stage on Monday July 2. Luckily, being one of the main mirrors, we were able to get our hands on the download before the masses did. Within 20 minutes the mod was fully downloaded and installed. With great excitement we join one of the SteamFriends servers and straight away look with awe at the well detailed loading screen.

As soon as we enter the game and selected our team and weapon preference the first thing we notice is the scenery. The only thing we do is just move our mouse and look about for a minute or so to take in the breathtaking scenery, with its highly detailed buildings and environments. Environments with cars, barricades and great eye for all the small details making it that you actually feel like you are in Iraq.

Gameplay
Luckily we first read the manual before starting to play, so we cycle the objectives and head for objective Charlie which appears on the radar at the top of the screen. While walking to Objective Charlie it becomes clear it is not a simple CSS arcade like game, where you can just walk down the street and still shoot everybody, no you have to think which route to take to outsmart the enemy and gain victory. Shooting someone or being shot nearly always means death. This is a part which makes this mod a lot more realistic than any other Source based game so far. After a short period of standing in the capture zone the zone is yours and you will then also automatically spawn around that zone when you die. It is then that you try to gain control over the remaining objectives and when you do your team wins the round. 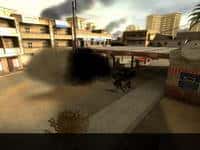 Teamplay
With the right mind as a commander, and a team working as one, you can gain victory a lot easier and is a lot more enjoyable to do. “The commander has the ability to order his troops around, telling them to ‘flank left!’ or ‘attack Objective Delta!’ or my favourite ‘Move move move!’ (haven’t you ALWAYS wanted to shout that on a battlefield?). When he does his job properly and others listen, that’s when you really FEEL this game tingling down your spine. Moving along with the rest of your team as a well oiled killing machine let’s you into the game’s secret – “teamplay pwns all” says Rave of Ravendalian (one of the regulars on our servers). 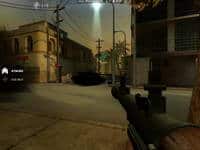