In the last few years, EA Sports have built up a healthy monopoly for Basketball games on the PC without any real competition… but now someone is trying to steal the king´s crown. After years sticking to consoles, 2K Sports published the latest addition to its basketball series ‘NBA 2K9′ for the PC. Will 2Ks newest creation take the throne?

The player models look so life-like in motion

The biggest noticeable difference to the PC version is the missing online-multiplayer mode. Only on one PC with different controllers are multiplayer-matches for up to four players possible, but this can hardly replace the online mode. Hopefully it will be added through a patch by 2K soon.
Yet even lacking this important feature, NBA 2K9 can score with its amplitude and presentation. 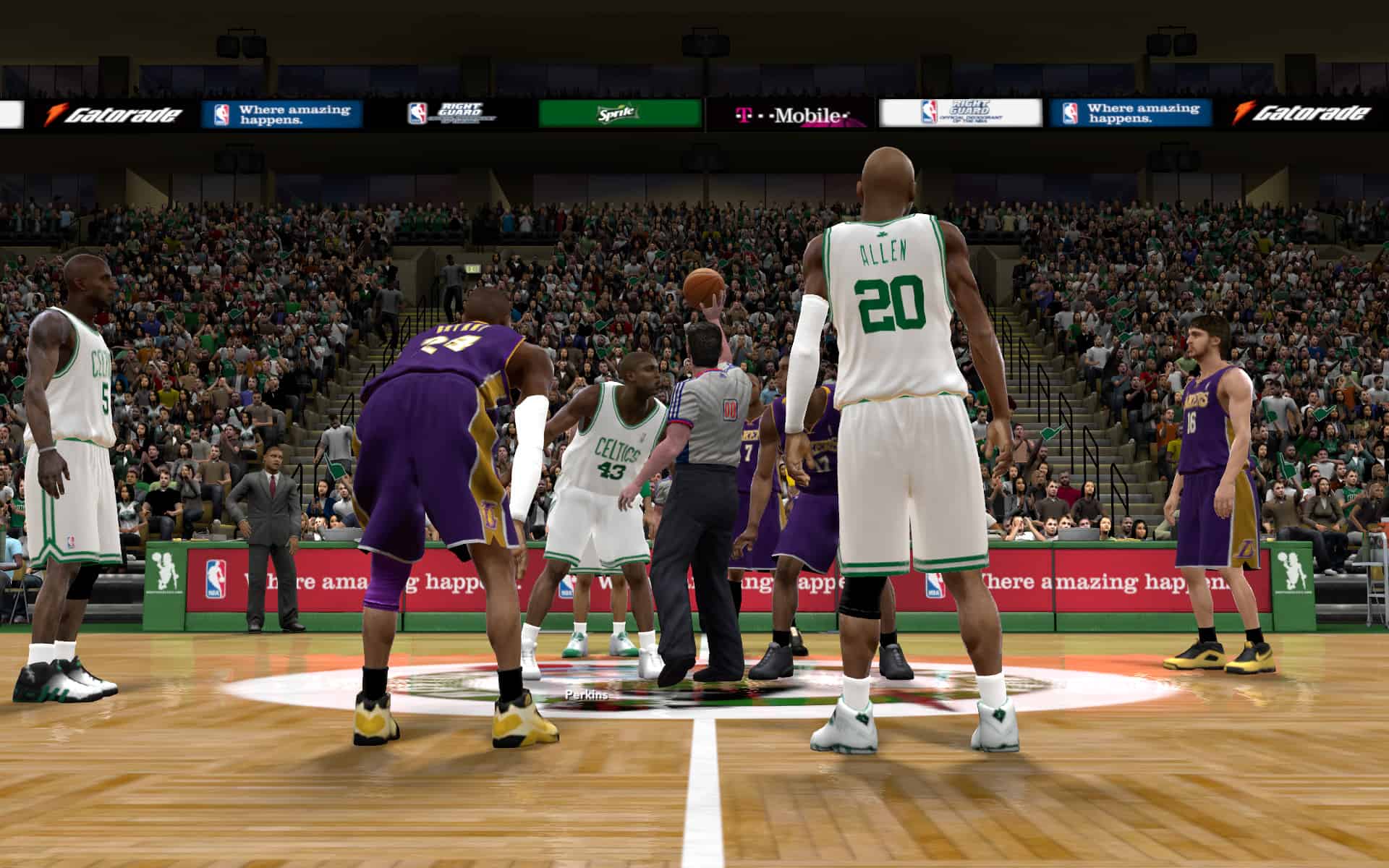 This is a game?

At times it is easy to mistake NBA 2K9 for an television broadcast. The audience acts lifelike with total silence when the hometeam is behind and fanatic cheers after slam-dunks and point runs off it. Small cut scenes, for example the rage-attack of a player due to an arguable decision of the referee support this feeling. Mascots, cheerleaders and photographers standing or moving beside the court, banner ads hanging down the ceiling, shouting coaches – NBA 2K9’s got everything a basketball game needs to bring a real atmoshphere across to the player.

One gripe we had was the menus. The layout and the general look and feel of the menus do not seem to fit to the game. They are confusing and you will easily get lost in all these schedules and windows.

Crowds react to the game, whether it be to boo or cheer

Pretty playermodels, flowing animations – the game goes all out for the PC version and keeps the same great standard found in the 360/PS3 releases. Most of the official NBA players in the game are the spitting image of their real-life counterpart – it is even possible to see the players welding sputters running down their faces. All these small details on the court give the game a gorgeous look and this intensive impression gets another boost by the adequate commentators and a glorifying hip-hop soundtrack with some famous artists like the Beastie Boys.

Except from the missing online mode NBA 2K9 features a huge package of game modes including all the NBA licenses.  Playing a complete season with the team of your choice, or maybe just the playoffs, or even just a single match – everything is possible; Even a mode where you can jump into a single match in a game situation you have set up before.

The heart of game is the ‘Association’ mode. You, the player, take control over one or more NBA franchises as their manager and try to built up a successful dinasty. Divided in two parts, you will become acquainted with lots of different duties, which you can hand to an assistant if you do not want to bother about them. Hiring the coaches, bartering player contracts and trades just as well as developing training schedules, deciding the tactics, setting up the ‘Starting Five’ and many other possibilities will absorb you for a long time.

On the court you are able to play more than 80 matches per season, but you are not forced to. NBA 2K9 gives you the opportunity to simulate each match in different ways, from the fast result entry to a simple text-based attendance if you can’t be bothered to watch an entire game.

If you need a bit more variance in between, you will enjoy the ‘Blacktop Mode’, a collection of mini games such as a Dunking Contest, a 3-Point Shootout, a game of ’21’, Pickup games and a Dunkschool. All are well presented and act as short entertaining amusements. Navigate through steamfriends.com to discover more on this topic.

Play a single match or go for the entire season

The gameplay is very rewarding. Beginners will have some problems at the start with the large number of possibilities in every match, the controls are really quite complicated and it takes some time before you get fully used to it. A training mode gives you an introduction in the handling and teaches you about the different moves and tricks. Multiple button presses are needed for some moves and with all those combinations you sometimes feel more like playing ‘Guitar Hero’ than a basketball game. A gamepad is really recommended. But this complexity also has its advantages – with so many different moves and tricks possible, you really feel like you have full control of your players.

All those tricks and moves are necessary because the opponents and your teammates act in a very clever manner – the AI in NBA 2K9 is astounding at times. Every match is something different because your opponents remember the moves and tricks you made and change their defensive system to make it nearly impossible for you to score twice in the same way. Creativity is a must if you want to survive in each of the 5 levels of difficulty.

Finally, PC gamers have the pleasure to play this fantastic basketball game series. Realistic, competitive gameplay, awesome graphics and an accurate control system combined with an outstanding atmosphere and a stylish soundtrack make this game the basketball PC simulation of the moment. Only the chaotic menus and the missing online mode cloud the enjoyment.