DIPRIP (or ‘Die in Pain Rest in Peace’) will soon bring its drive-and-shoot-em-up Steam-wards. Steamfriends were invited to take a look and now bring you all the details.

Right off the mark, we should point out that DIPRIP is a complete clone of the acclaimed ‘Twisted Metal’. Players drive huge beasts of cars across massive landscapes, ranging from city centres to rural farms and, equipped with heavy firepower, attempt to blow their opponents to smithereens. Starting with just a pitiable machine gun, much more powerful weapons can be obtained to give players that extra fighting chance – the minigun makes the machinegun look like a pop gun, the mortar lets players pick their enemies off from a distance, and missiles give the enemy something to cry about.

A huge, easy-to-read radar in the top corner helps the player find his next victim meaning there is rarely a moment in which there is nothing going on. Your enemies are all the way across the other side of the map? Simple! Just hold down the left shift button, and your turbo kicks in, boosting you to breakneck speeds and helping you clamp down on your enemies within seconds.

Maps are littered with decorations and obstacles, and almost everything can be destroyed simply by driving head-on into it. Powering through a built up area causing complete carnage and destruction hasn’t been this much fun in a good while, and it really does make you feel like you are completely un-restricted in how you play.

Control-wise, the game has a little way to go. Driving sometimes feels unresponsive and got us quite agitated. Aiming, however, works quite well – the minigun’s auto-aim and the missiles’ lock-on ability mean you can concentrate more on the driving. Enemy missile about to show you the pearly gates? Fire off a ‘countermeasure’, and the rocket will attempt to destroy this decoy instead, leaving you to make a haste getaway (or return fire, of course).

Graphically it is nice enough to look at – it won’t win any beauty pageants, but it won’t get teased at school either. The ‘speeding’ effect when you turn on the turbo is very nice and gives a real sense of ‘whooooa!’, which is what you’d expect from super speeds. 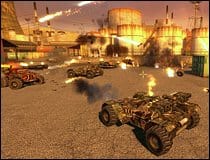 One area the DIPRIP team might want to look into is their sound-banks. The revving, the loud explosions, the machinegun rat-tat-tatting away are all very realistic and fit with the game, but it feels like something is missing… A rocking soundtrack, perhaps? Maybe even a commentator’s voice announcing your every demise.

With a beta release in the pipeline very soon, DIPRIP is shaping up to be something special – there is nothing like it on Steam, so it will be well worth the look in. With a few extra vehicles, game modes, weapons and maps, you could soon be Dying in Pain, Resting In Peace, Laughing In Awe many times over.