Your name is Chell and you are a test participant at the ‘Combine Portal User Training Facility’. You have been supplied with the ‘Aperture Science Handheld Portal Device’ (a.k.a. The Portal Gun) with which you now have the ability to create portals which you can jump into and come back out of at your beck and call. Your objective is to clear rooms by putting cubes on buttons, firing yourself through the air and navigating small balls of light towards their goals. Sound odd? Steamfriends.com beckons you to step into the world of Portal.

Let’s get the bad stuff out of the way first. To put it bluntly, Portal is short – too short. With only two hours needed to take care of the main story and then another two to complete the extras, the only way you will feel that it is money well spent is via ‘Le Box Orange’ and even then you’ll still get to the end, see the credits roll and think ‘What… Is that it?’. Worst still, the game actually only gets challenging after about 90 minutes of playing, making the game feel like even more of a cop-out. 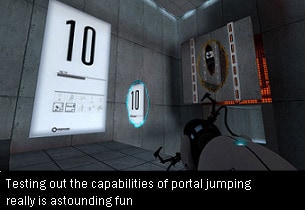 To add to all this, there’s also a slight graphical abnormality. Generally the game looks gorgeous, with beautiful shining surfaces, intricate details on objects and striking visual effects. However, it is commonplace to see very bland and empty rooms and corridors around nearly every turn. Wherever you look you are surrounded by metal walls, floors, ceilings and the rooms couldn’t be any sparser if they tried. In a creepy way this does add to the universal effect of being all alone, trapped with not much hope of escaping – but sometimes it just feels like lazy level design and maybe a little more could have been done here and there to spruce up these plain surroundings.

This can nearly be forgiven though, for the absolutely incredible sights you see once you start putting the Portal gun to good use. If placed correctly, portals will give you the ability to see yourself from an entirely different position and the effects on the portals themselves are immense. This isn’t just a case of the game teleporting you when you step through one of these inconceivable doorways – it actually feels like you are stepping into the wall; Into a completely new room, which just happens to look identical to the one you left milliseconds ago. Even after playing the game to death, it’s still hard to not walk through one of these magical thresholds and think ‘Wow’.

The actual layout of the game itself works like a dream – every twist and turn is quick and to the point, yet it never leaves you wondering what to do next. You are lead through your training merely by the voice of a supercomputer and everything you need to know is explained to you, and nothing more. Although we won’t go into the details of the story as to not ruin it for you, it’s safe to say that the sinister feeling that seems to linger towards the start of your journey definitely does NOT go away.

And Then There Will Be Cake

Sound-wise, Portal is simple but extremely effective. There is a major lack of music throughout the game, however when it does kick in it really adds to the atmosphere and makes the situation you are in seem much more driven and demanding. But where there is a lack of soundtrack, this is easily made up for by everything else emanating from your speakers. Many of the effects from Half-Life 2 have been recycled, which actually helps to give the feeling that your settings are part of the Half-Life 2 world (which they apparently are).

However, the best effects are those which are not reused – mainly the supercomputer’s commanding voice. She provides some of the best comedy lines seen in a Valve game, from the warning that if you fall in the lava it will result in your application to the testing facility being terminated – oh, and your death – to her constant promise that at the end of the training, you WILL receive cake. The small sentries that you encounter later on in the game also enjoy churning out small pieces of wit which will always bring a smile to your face – upon destroying one, just before it shutdowns, it may weakly mumble ‘I don’t blame you…’. Either it will make you feel sorry for the little guys, or give you the urge to kill some more.