SourceBans Release Candidate (RC) 1 has been released. Many wondered if it was ever going to happen, but the wait is over and here it is.

SourceBans started of as an idea about half a year ago when SourceMod started to get more into a useable stage, but the idea of such a tool has been in the back of the developers team minds for so much longer. Originally it was the plan to make a more user friendly version of AMXBans web panel for the Source Engine, but over the past months it has grown out to be so much more.

Ban System
When running SourceBans web interface and SourceMod plugin together, you will be able to instantly ban people from all of the servers you have added into the system. Once you either ban a player from the server, or through the web interface, the specified player will instantly be banned accross all of your communities` servers. You will no longer need to add the STEAM Id’s of users to all of your servers` config files, and keep the configs synced and updated after each ban.

Admin Management System
As-well as having a kick a** ban system for all of your servers, SourceBans allows you to manage all of your SourceMod admins through a simple and easy to understandable web panel. For example, you can create a new admin group which will only be able to kick and ban. After this, you can add a new admin, type the required information and add that admin to that new group, and that admin will automatically inherit all of the privalages from that group. And starting next map, the admin will have the specified level of admin in the server, or group of servers that you have set.

Admins can be set on individual servers, or if you want, you can create a group of servers. And when adding an admin, you will have the option to give that admin the privaleges on that group of servers. So adding admins is easy and fast. 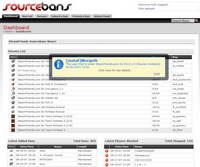 This first Release Candidate has been released to show it to the public and learn about any bugs that still need to be squashed. If there are any bugs, ideas or requests you like to share with the SourceBans team you can do so in the SteamFriends SourceBans Forum.

For all information you can check out SteamFriends Wiki under the SourceBans section. For more information and the download you have to check out www.sourcebans.net.

UPDATE
It appeared there were some bugs in the installer which should be fixed now. If you were having problems you can now redownload the file from www.sourcebans.net.

And for the curious ones who just want to get a quick glimpse you can have a look at the SteamFriends SourceBans version @ http://steamfriends.sourcebans.net